Due to this observation, the y-axis is called fast-axis while the x-axis is called slow- the axis. High power diode manufacturers provide specifications for the divergence distribution of the lasers.

In a common laser system, only a convex lens is used to zoom the laser beam, resulting in the rectangular laser spot, like AtomStack A5 and many other laser engravers from other brands, however in high-end laser engravers, such as AtomStack A5 pro, A5 M30, and A5 M40, besides convex lens, an additional lens called Fast-Axis-Collimating Lens is used.

FAC lens is an optical lens that collimates light spreading from a semiconductor laser (LD) in the fast-axis direction (Figure 2). LD has a large divergence angle in the fast-axis direction, so the output light cannot be efficiently used unless collimated. The FAC lens collimates light spreading from an LD into a narrow beam with a radiation angle of several milliradians (mrad) or less so that the diverging light can be efficiently utilized. 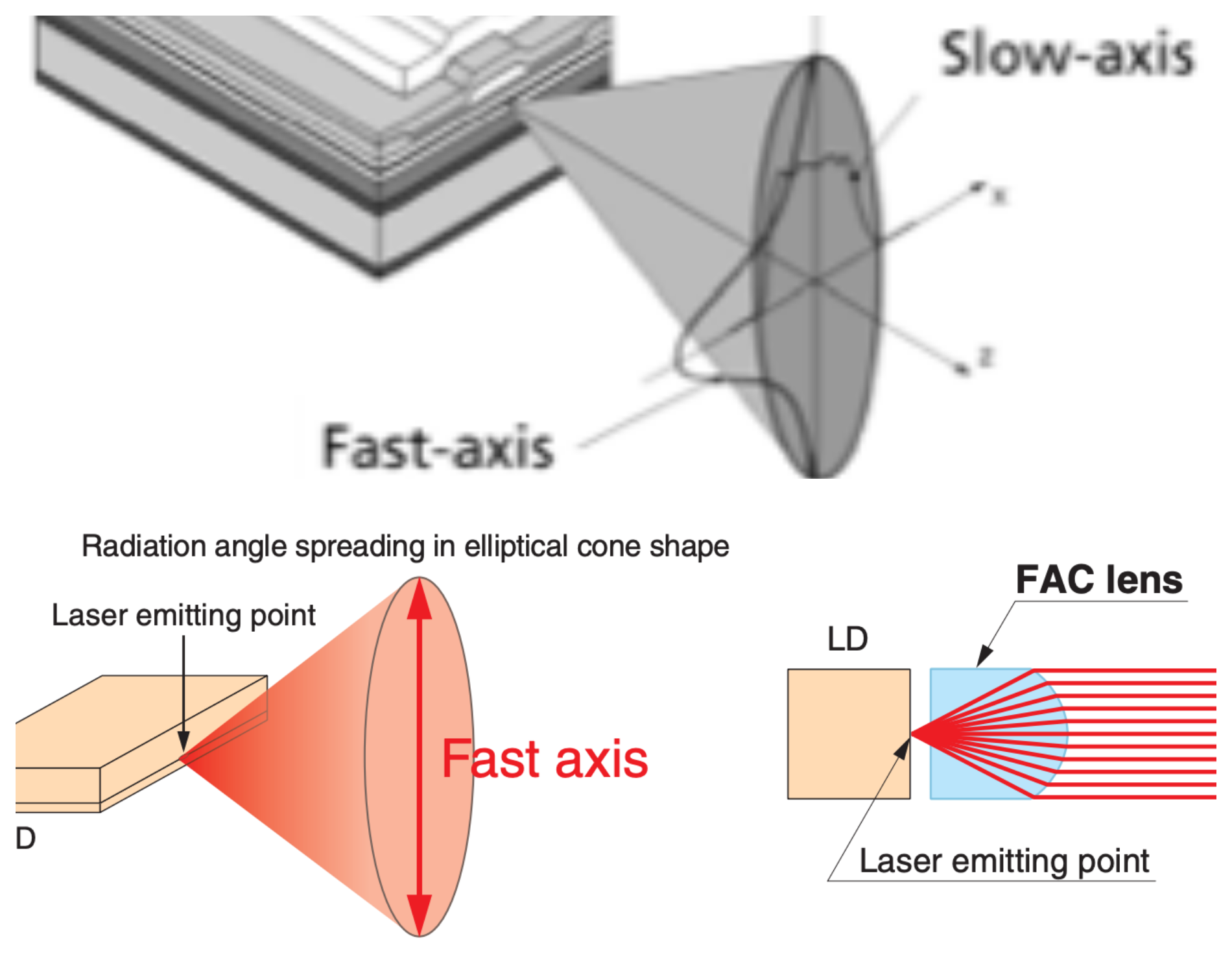 In this case, instead of a rectangular spot, the laser beam passes through the FAC lens and Convex Lens is zoomed in a more squared spot. We call it a compressed-spot laser. Adding a FAC lens to our laser system won’t noticeably reduce the laser power, and since the laser beam is more concentrated, the power density is much higher than those laser engravers that don’t have a FAC lens.

Absorption: The transfer of radiant energy into the target tissue resulting in a change in
that tissue.

Active Medium: Any material within the optical cavity of a laser that, when energized,
emits photons (radiant energy).

Attenuation: The decline in the energy or power as a beam passes through an absorbing
or scattering medium.

Average Power: An expression of the average power emission over time expressed in
Watts; the total amount of laser energy delivered divided by the duration of the laser
exposure. For a pulsed laser, the product of the energy per pulse (Joule) and the pulse
frequency (Hertz).

Beam: Radiant electromagnetic rays that may be divergent, convergent, or collimated
(parallel).

Class IV Laser: A surgical laser that requires safety personnel to monitor the nominal
hazard zone, eye protection, and training. This class of laser poses a significant risk of
damage to the eyes, and any non-target tissue, and can produce plume hazards.

Coagulation: An observed denaturation of soft tissue proteins that occurs at 60˚C.

Contact Mode: The direct touching/contact of the laser delivery system with the target
tissue.

Continuous Mode: A manner of applying the laser energy in an uninterrupted (nonpulsed) fashion, in which beam power density remains constant over time; also termed
continuous wave, and abbreviated as ‘CW’. Contrast with ‘Pulsed Mode’.

Energy: The ability to perform work, expressed in Joules. The product of power (Watts)
and duration (seconds). One Watt second = one Joule; 1 J = 1 Watt x 1 second.

Energy Density: The measurement of energy per area of spot size, usually expressed as
Joules per square centimeter; also known as fluency.

Free-Running Pulse Mode: A laser operating mode where the emission is truly pulsed
and not gated. A flashlamp is used as the external energy source so that very short
pulse durations and peak powers of thousands of Watts are possible. A laser operated
in continuous waves.

Gated Pulse Mode: A laser operating mode where the emission is a repetitive on-and-off cycle. The laser beam is actually emitted continuously, but a mechanical shutter or
electronic control ‘chops’ the laser beam into pulses. This term is synonymous with
chopped pulse mode.

Joule: See Energy. A unit of energy or work equal to an exposure of 1 Watt of power for
1 second.

Noncontact mode: A laser technique in which the delivery system is used without
touching the target tissue; light radiation made be defocused or focused, depending on
the operator’s technique and procedure.

Photobiomodulation (PBM): The use of light radiation to elicit biological responses in
living cells.

Peak Power: The highest power in each pulse.

Plume: Essentially the smoke produced for aerosolization of by-products due to laser-tissue interaction. It is composed of particulate matter, cellular debris, carbonaceous
and inorganic materials, and potentially biohazardous products.

Power Density: The measurement of power per area of spot size, usually expressed as
Watts per square centimeter; also known as intensity, irradiance, and radiance.

Pulse Duration: A measurement of the total amount of time that a pulse is emitted; also
known as pulse width.

Pulsed Mode: Laser radiation that is emitted intermittently as short bursts or pulses of
energy rather than in a continuous fashion. Contrast with ‘Continuous Mode’.
Repetition Rate: Number of pulses per second, also known as pulse rate; usually
expressed in Hertz (Hz) or pulses per second (PPS).

Scattering: An interaction as the laser beam disperses in a non-uniform manner
throughout the tissue.

Thermal Effect: For lasers, the absorption of the radiant energy by tissue produces an
increase in temperature.

Thermal Relaxation Time: The amount of time required for the temperature of the tissue
that was raised by absorbed laser radiation to cool down to one half of that value after
the laser pulse.

Vaporization: The physical process of converting a solid or liquid into a gas; for dental
procedures, it describes the conversion of liquid water into steam.

Previous
The Difference Between Atomstack A5 series and A5 M series 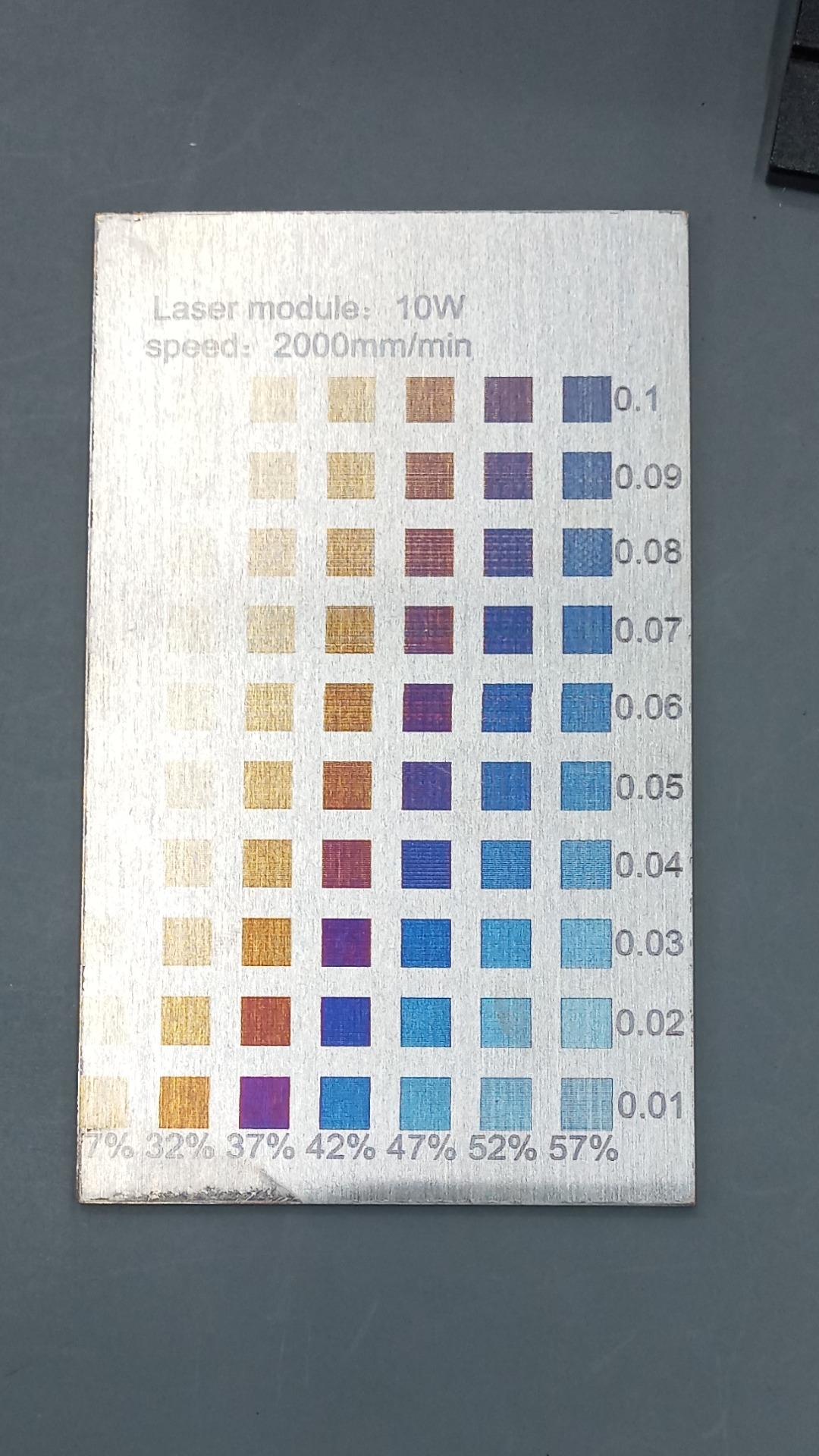 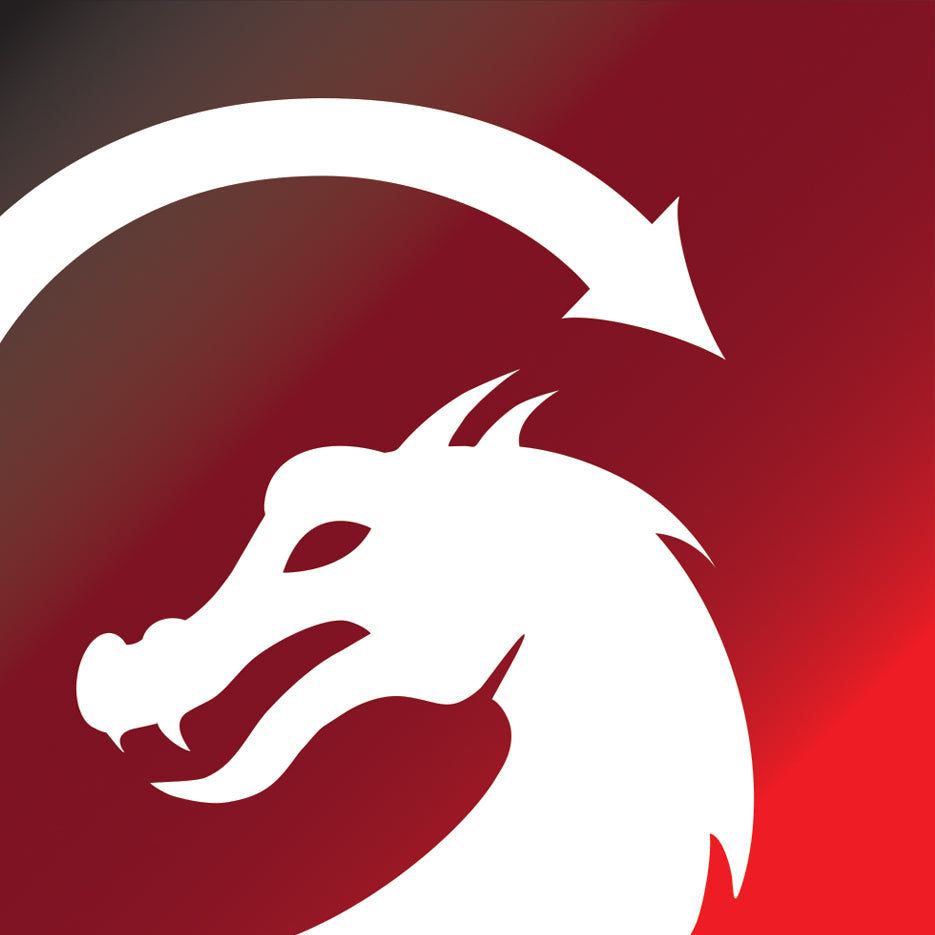